The Middle East and its Tribes: A useful resource or a troubling legacy? 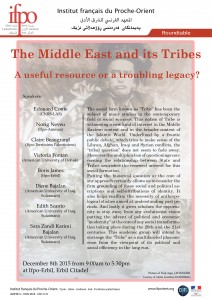 The social form known as “Tribe” has been the subject of many studies in the contemporary field of social sciences; examples of these works include Émile Durkheim (1893), Pierre Clastres (1974) and Edward Evans-Pritchard (1968). This category has been judged irrelevant by many specialists of African societies due to the colonial semantic weight (Amselle et M’Bokolo, 2005). However this notion of Tribe is witnessing a new kind of interest in the Middle Eastern context and in the broader context of the Islamic World (J. Friedman, 1975 ; P. Bonte et E. Conte, 1991 ; P.S. Khoury et J. Kostiner, 1991 ; H. Dawod, 2004 ; R. Tapper, ; P. Dresch,  etc.). Underlined by a frantic public debate, which tries to make sense of the Libyan, Afghan, Iraqi and Syrian conflicts, the “tribal question” does not seem to fade away. Moreover the multiplication of questionings concerning the relationship between State and Tribes nourishes the renewed interest for this social formation.
Although this roundtable will definitely deal with contemporary problematics, it will avoid answering the specific questions dealt with in the public debate, namely “whether Middle-East societies will undergo a process of re-tribalisation or of de-tribalisation?”. This academic group will intend to envisage the “Tribe” as a multifaceted phenomenon from the viewpoint of its political and social efficiency in the long run. The proposed study will take the form of a series of linked investigations highlighting analogous issues, concerning diverse populations in different periods.
Putting the historical question at the core of our approach certainly allows us to consider the firm grounding of these social and political ascriptions and self-attributions of identity within the Middle East societies. It also helps reaffirm the necessity of anthropological studies aimed at understanding past periods. And lastly it gives scholars the opportunity to stay away from any evolutionist vision putting the advent of political and economic “modernity” at the core of any social transformation taking place during the 20th and the 21st centuries. Thus the notion of neo-tribalism put forward by Jonathan Friedmann (2004) will be questioned. This group will deal with the writing of the history of well-known contemporary tribes while reconstructing historical narratives used by tribal actors and dealing with tribal phenomena evoked by Arab, Turkish, Persian and other historiographies. The different case studies will present the meaning of what the ‘Tribe’ implies for social, political and economic organization of Middle Eastern societies.
Several thematic paths will be considered:

Calendar of the publications